The April issue of Monthly Review contains an article by the contemporary German Marxist scholar Michael Heinrich titled “Failure of the Falling Rate of Profit Theory – Marx’s Studies in the 1970’s.” Marx had maintained in Volume Three of Capital that there was a tendency for the general rate of profit to fall in capitalist economies, which tendency he maintained was part of the inherent logic of capitalism. This was not a view unique to Marx, of course. Adam Smith, for example, in Book I, Chapter 9 of The Wealth of Nations maintains that the rate of profit tends to fall over time due to completive forces. John Stuart Mill also argued that there was a tendency for the rate of profit to fall over time. But Marx made this an important part of his critique of capitalism in Volume Three of Capital. Heinrich, in his article and in chapter 7 of his recently translated book, An Introduction to the Three Volumes of Karl Marx’s Capital, also published by Monthly Review Press, maintains that this “law” applies only under certain specific conditions. To understand his argument, it is helpful to develop the simple math of Marx’s argument.

In Chapter IX of Volume I of Capital Marx had defined his terms:

In Chapter III of Volume III of Capital Marx presents the definition of profit in capitalist enterprise:

By dividing both the numerator and denominator by v, we get what Morishima (1973, Marx’s Economics) called “the fundamental theorem of Marxism”:

What this equation clearly shows is that as relative investment (c/v in the denominator) increases, the rate of profit tends to fall, assuming a constant rate of exploitation (s/v in the numerator).

In Chapter XIII of Volume III of Capital Marx presents his argument for “The Law of the Tendency of the Rate of Profit to Fall.” Marx starts with the example of a constant rate of exploitation. In his example the value of constant capital is varied from 50 to 400 currency units while in each case v is equal to 100 and the rate of surplus-value is 100%, or 100 currency units. He calculates the rate of profit in each case (s/C) and finds that the rate goes from 66.67 percent in the first case to 20 percent in the last case as investment is increased from 50 to 400 units. I think it is useful to see this graphically in the following figure. In this case of the “same degree of labour exploitation” the result is a falling rate of profit as relative investment, c/v, is increased.The figure illustrates this case. s/v is constant, meaning that the application of capital has not made an hour of labor more productive. This is surely not a very common situation. Why would a capitalist invest if he didn’t think that it would make labor more productive? This case results in a falling rate of profit: as the constant capital increases from 50 to 400 units, the rate of profit falls from 70% to 20%.

With this background in the simple math of Marx’s model I want to illustrate the impact of several additional cases as follows:

Graphs similar to the case of constant exploitation are illustrated below for each of these cases.

In this case I have assumed that the rate of exploitation would decrease as investment is increased. This is not a very realistic case, either, since it would imply that the surplus per worker decreases as more investment is supplied. Not surprisingly, the rate of profit falls in this case as well and to a lower level than in the case of constant surplus exploitation.

This is a more realistic case. Here, as investment is applied to the enterprise, the rate of extraction of surplus from an individual worker increases. For otherwise, why would the capitalist invest? In this case the rate of profit still falls, however, from an initial value of 70 percent, but in this case to only 40 percent.

This case is set up so that the rate of growth of s/v (the slope of the line) is just greater than the growth rate of c/v. Unlike the previous cases, this case yields an increasing rate of profit. Is this a possible case? It certainly seems to me in cases where the rate of surplus extraction is greater than the relative value of capital invested that profits would rise. In any case, it seems to illustrate the incentive that capitalists have to increase s/v, by increasing the amount of surplus achieved (by monopoly, for example). This case assumes a constant variable capital. 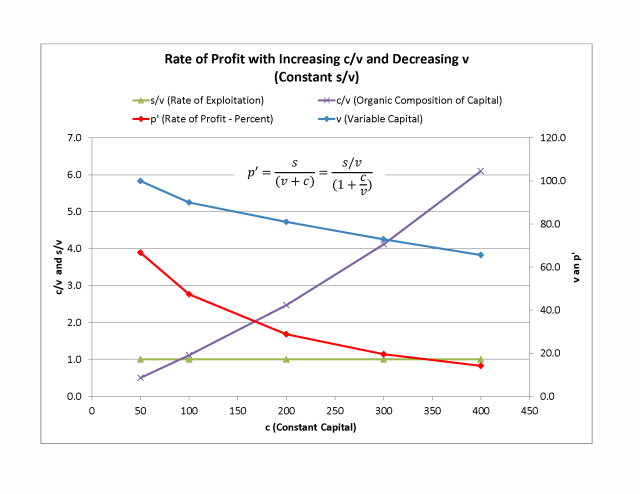 This next case illustrates the case where the variable capital following investment is driven down, either by decreasing the number of workers or by decreasing their pay, or both. In this case s/v, the rate of exploitation is constant. This turns out to be another case where the rate of profit falls, from 70% to under 20% as constant capital is increased from 50 to 400. 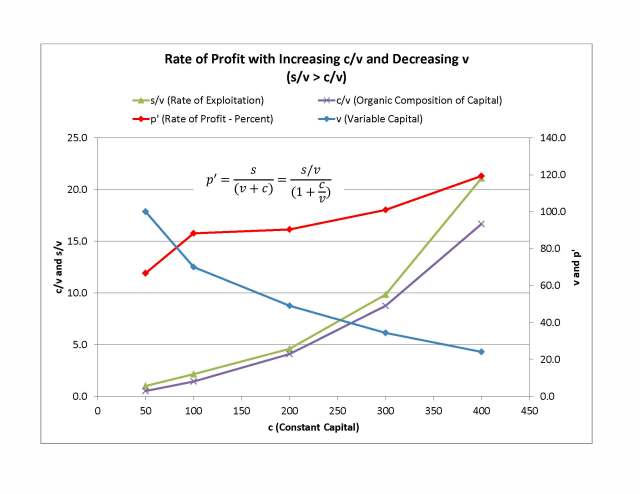 In this last case we assume that the rate of expenditure on wages and supplies (variable capital, v) decreases, the situation that one would think the capitalist investing in an enterprise would expect, but unlike the previous case with falling v, in this case the rate growth of the rate of exploitation, s/v, is greater than the rate of increase in relative constant capital, c/v. In this case, the rate of surplus starts at 100% of wages (v) but increases to 150% as investment is applied. Here we see that the rate of profit soars from the initial rate of 70% to 120%.

So what does this seem to show? To me it seems to show that, even in Marx’s world of pure competition, it is very possible for profit rates to increase, but for this to happen the rate of exploitation needs to increase more dramatically as more investment is applied. In our age of globalization and union busting, isn’t that what we see happening?

Randal has an undergraduate degree in political philosophy, but has a graduate degree in engineering and has earned his bread for 30 years working on municipal and community water supply and wastewater collection and treatment systems in the US, Caribbean, Latin America, and Asia.
View all posts by Randal Samstag →
This entry was posted in Economics. Bookmark the permalink.

8 Responses to Falling Rate of Profit?